In the documentary, Lost in Berlin, licensed psychologist, director and filmmaker, Rod Martel takes us on the incredible journey of his mother Gerda Martel Freund spanning the globe from Nazi Germany to the Canary Islands and ultimately to Minnesota. He guides the viewer on his desperate quest to discover his family’s past before his mother’s rapidly fading memory closes the door forever. To date, the film has won 17 awards including Best Feature at the 2020 Twin Cities Jewish Film festival.

Martel was raised in the West Rogers Park neighborhood of Chicago and came to Minnesota in 1971 to pursue his interest in Scandinavian studies in grad school. He worked a dual career in Minneapolis Schools and private practice as a licensed psychologist for more 30 years.

Martel’s parents were refugees from Germany, where his father’s six uncles, one aunt and their families were murdered in the Holocaust. His mother was an only child and her mother was murdered in a psychiatric institution as part of a little know Nazi program to exterminate people who weren’t fit to work. “I grew up knowing that something was ‘off’ within my family, but I wasn’t able to put words to it,” said Martel. “My mother and I were very close and as I got older, I knew I had to tell her story. I started saving documents, memorabilia and interviewed everyone I could to see how close I could get to the ‘truth’ of what happened.” 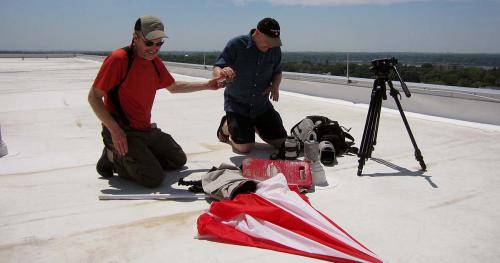 Martel had an unwavering desire to make this film, but lacked the technical expertise. In 2010 he reached out to Minneapolis College faculty member Vicki Johnson, whom he had a previous partnership with, for recommendations. She connected Martel to faculty member Randy Johnson and a 10-year partnership was created, which pulled in students and faculty from the College and ultimately helped bring Martel’s vision to life in the documentary, Lost in Berlin.

“It was an ambitious project normally reserved for experienced filmmakers with large budgets,” said Martel, who worked with Randy Johnson weekly for the duration of the project. “Randy would be at the computer working his magic through Premiere Pro and After Effects and I would be a few feet behind, helping him translate my vision. Additionally, Johnson did some of the cinematography, most notable, the interview with my mother.”

Documentaries that rely primarily on artifacts are incredibly difficult to make in a way that captures and retains attention of viewers. It was Johnson's job to bring them all to life, which is where the artistry comes in. “I have incredible gratitude for the trust allowed to us to be part of this personal story,” said Johnson, who indicates the project was a labor of love. “In life, you always hope to be provided the chance to do unique work and this was a highlight of mine.”

Jaisa Blegen, graphic design student and collaborator on this project, was brought into the project to provide a new set of eyes during post-production. “I’m not used to working on such a large project and was grateful for this opportunity,” said Blegen who ensured consistency in graphics throughout the documentary. “It was an extremely humbling, satisfying and rewarding for me to be a part of bringing the heart and soul of Rod’s story to the screen.”

Throughout the process of making this film, Martel kept asking himself, “What do I need to do to make this appeal to everyone?  I tried to keep the themes universal, i.e., how can one overcome tragic loss and still find happiness? What are the factors that contribute to mass movements? How do we take care of our aging parents? Lastly, I deal with the process of growing up and realizing that our parents were not infallible, and that part of the maturation process is beginning to see our parents as they really are and to accept that reality.”

Martel learned that as he grew up there were the day-to-day activities of a middle-class family as well as a subterranean reality playing out in his family. His mother was wrestling with leaving her mother behind, trying to live up to the expectation of a middle-class lifestyle so very foreign to the one she was raised in. His father, who had escaped Nazi Germany through Cuba, was attempting to raise a family to the best of his ability as he struggled with his own sexual orientation. As a young child, Martel sensed something was amiss, but I couldn’t put words to it, a common phenomenon in families.

“We had no idea how the film would be received,” said Martel. “I was so fortunate to connect with the local company Pixel Farm. Dave Sweet did an incredible job of color grading the film and restoring the 8mm footage to give us a polished final product and senior producer Kathy Yerich generously offered her artistic expertise.“

“I walk with a group of men once a month and one of them is a filmmaker,” said Martel. “We both agreed that the viewer doesn’t care whether you spent $80,000 on a film or eight million. All they care about is whether or not it is interesting, informative and/or entertaining. So as trite as it may seem, the advice to follow your passion is good advice and, yes, a bit of obsession helps.“